Home
Who we are
Stories
Countries
Teaching transition

Who we are? old 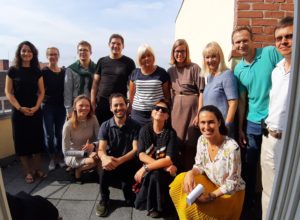 About the project: How to talk about the past and present?

30 years since the fall of the Berlin Wall and the beginning of transition in Eastern Europe and the former Soviet Union witnesses and drivers of those events are still actively shaping the social, political and cultural life. Meanwhile a generation has come of age that has no direct memory neither of communism nor of transition.

Their knowledge and perceptions of this recent past ¡s mostly based on stories of the older generations and on politicized and instrumentalized discourses. Against this background and as practitioners of history and civic education, we aim at taking a closer look at two of the areas that mostly contribute to the formation of knowledge and perceptions of that recent past – the public discourse and teaching of transition.

We aim at working:

At the end of this process, we hope to have a more multifaceted and nuanced understanding of the impact of transition on societies in Eastern Europe and how history and civic education can be used to help deal with it. Some of the key questions are whether the discourse incorporates the plurality of perspective and voices and what can be done to accommodate the diversity of viewpoints. What is the role of international exchange for a better understanding of the national context? What formats and methods can be used to mainstream the topic and engage a wider audience in a more diverse conversation?

In order to answer them the project works on two levels:

This part of the work includes analysis of school curricula and textbooks to find out how transition is taught and framed in formal educational institutions.